Another « Bachelorette » couple has called it quits.

Season 16 star Clare Crawley and her fiancé Dale Moss have split after getting engaged over the summer while filming.

The 39-year-old hairstylist and the former football star, 32, met on the show and had a whirlwind romance that ended with a reported 4.5-carat sparkler on her finger after just two weeks of filming.

« I wanted to share with you all that Clare and I have decided to go our separate ways, » Moss confirmed in a post on social media on Tuesday.

« We appreciate the love and support we’ve received from so many people, but this is the healthiest decision for both of us at this time, » he added. « We strongly believe in leading with love and always remaining true to oneself – something our families have taught and instilled in us throughout our lives. We only hope the best things for one another. » 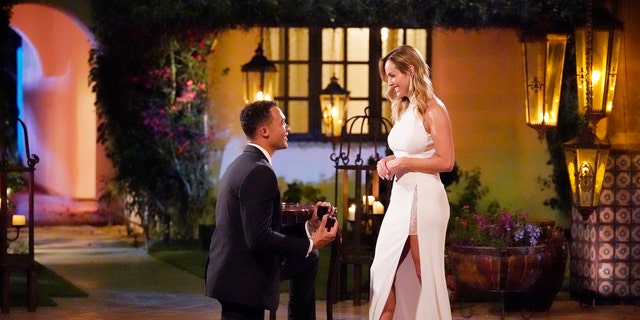 When Crawley accepted his proposal, she told Moss, « You embodied everything that I want in a man. I’m just so in love with the man that you are. »

Moss told her, « From the moment I stepped out of the limo, this was special. I know without the shadow of a doubt that you would go to the end of the world for me and I’ve never had that. I’m so grateful for that. »

When Crawley and Moss left the show, Tayshia Adams stepped in to take over the reality TV dating show and ended up getting engaged to Zac Clark.

Adams, 30, and Clark, 36, are still together and currently living in New York City.